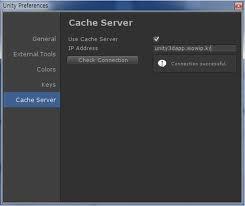 The Unity Asset Server can now be hosted on Windows! (in addition to Mac OS X and Linux as before)

The Unity Asset Server can now be hosted on Debian-based Linux distributions as well.

There are tools to help simply the backup and restoration of Asset Server databases.

The Unity Asset Cache Server drastically reduces the time it takes to import assets when working in large teams. It makes it easier to control the schedule of complex, multi-team projects. When working in large teams it is unavoidable that everyone has to repeatedly import the same assets. The Unity Asset Cache Server facilitates a more smooth and time saving sharing of asset imports between projects and folders. Switching between different platforms takes minutes instead of hours on large scale projects, and, once you set it up, the Asset Cache Server works away in the background to reduce wait times, without getting in your way.

Unity Asset Server is is a simple yet powerful version control server for game assets and scripts. With the Team License add-on for Unity and Unity Pro, your team can work together locally and remotely. Unity Asset Server is available as Microsoft Windows and Mac OS X Installers and as Linux RPM, Debian, and source code packages.

Updates, commits, and graphical version comparisons are all performed inside the Unity Editor. When files are modified, their status is updated instantly. Renaming and moving assets is handled elegantly and seamlessly.

Projects with thousands of multi-gigabyte files are handled with ease by using an API for integrating 3rd party version control solutions with Unity.